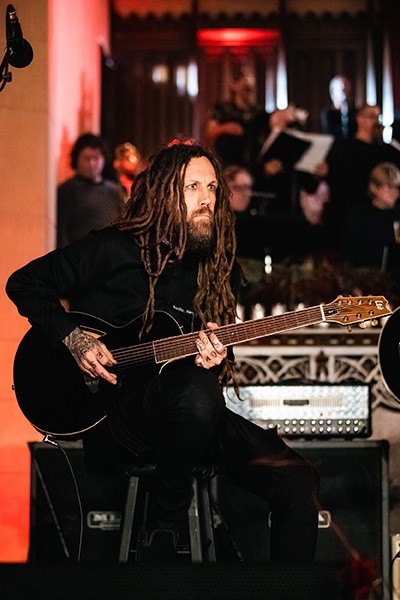 ESP Signature artist Brian "Head" Welch of Korn had a special requirement at Korn's record release event for the album Requiem (Loma Vista/Concord). In keeping with the theme of the album's title, the release party was held on February 3 at the the Hollywood United Methodist Church, and only 300 fans got to see the show live, while thousands and thousands of others watched it live streamed on YouTube.

Head's dilemma was the choice of guitar he'd use for the event. Typically performing on his ESP Signature "Sir Headly" model (available in the LTD series as the SH-7 EverTune and the affordable SH-207), the intimate nature of this church-based release party meant that the guitarist would need a seven-string guitar that could handle the performance of a slew of new Korn tunes, but in a more subdued setting.

Enter the LTD TL-7. Part of the LTD Thinline Series, the TL-7 is a seven-string transducer-electric guitar designed for musicians who want the sound of an acoustic guitar, but with the playing comfort and fast feel of an electric guitar. The TL-7 is the first 7-string model in this series. It gives you the expanded range you need for specialized music forms, with the lowest string typically tuned to B. The TL-7 has high-quality components like a Graphtech Nubone XB nut and saddle, Grover tuners, a Fishman SONICORE pickup, and Fishman TL-3 preamp with onboard tuner.

By all accounts, the release event for Requiem was an amazing show, and the TL-7 played by Head perfectly handled the nuances of Korn's music. Get Requiem wherever you buy or stream music.