I feel like the Hetfield line could use some new colorways. I really think different burst finishes could work really well on both the Snakebyte and Vulture models. (See rough mockups below). 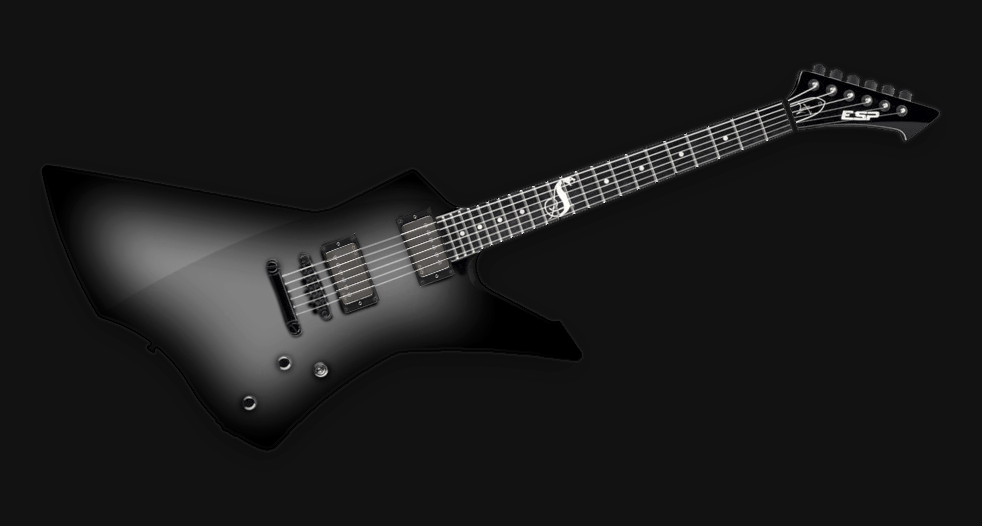 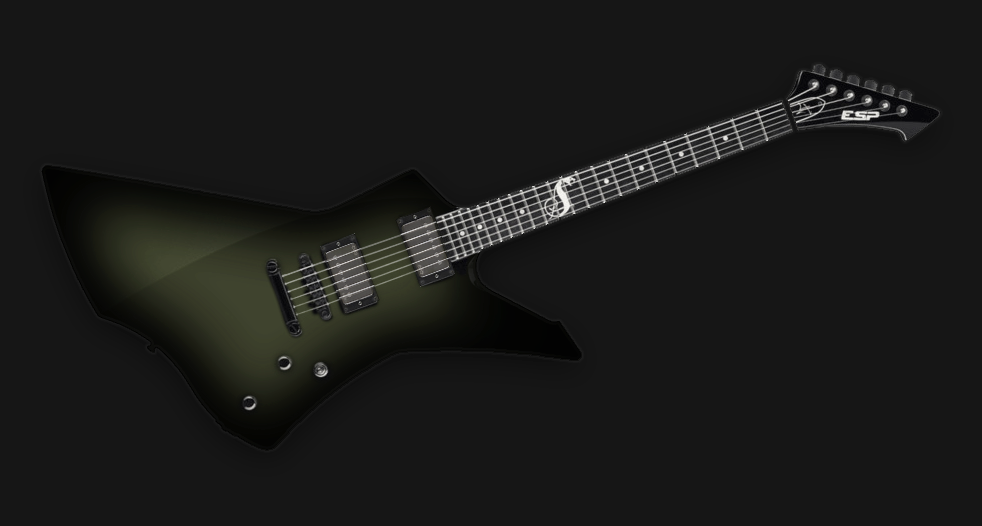 Very interesting. Maybe a bit to similar to Kirk’s style for James to feel confident about producing. I think maybe some more colors in a flame top.

I get it. I think the green looks too much like Kirk and Bill from Mastodon. Hetfield was using silverbursts before Kirk's green signature was released though. I think more flametops would be killer and admittedly is where I got the idea. 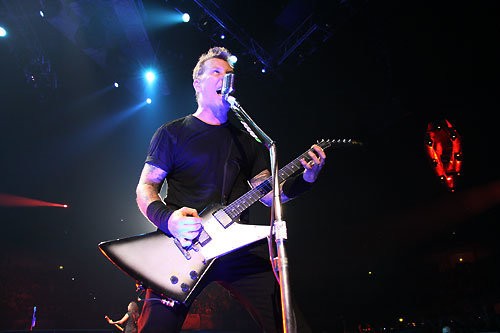 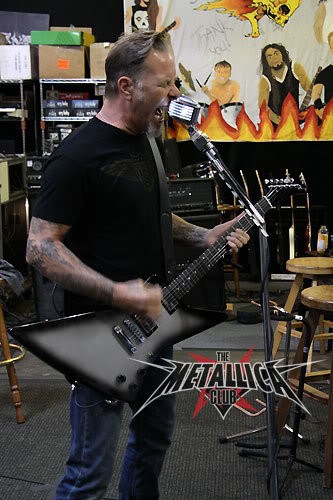 Well being I’m from San Antonio I would agree on this silver burst after all, I’m a huge spurs fan.

Silver Burst Snakebyte could be cool. I'd Love to see one in like a Candy Apple Red or even a Metallc Orange.

Metallic orange would have been perfect for the Giants thing a few months back.

I have never seen that silver burst Explorer before, fuck they must own some guitars lol.

I think their guitar techs should publish a book of their collection.

I'm thinking that silver burst explorer is custom painted, if you notice the control knob layout it is either and 84-85 or a 2007 84 reissue which was only white, and I've never seen an 84-85 in a silver burst finish. But I could be wrong.

I did a little more tinkering just for fun and clearly used some feedback on this thread as inspiration. dubster82 - the last two are for you. 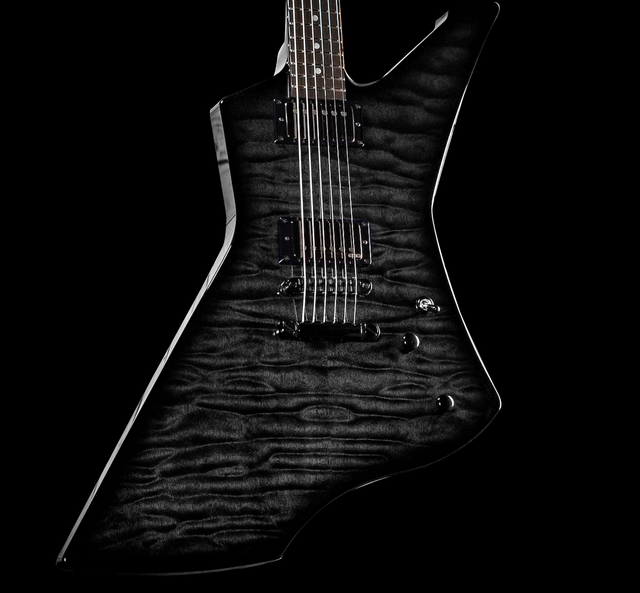 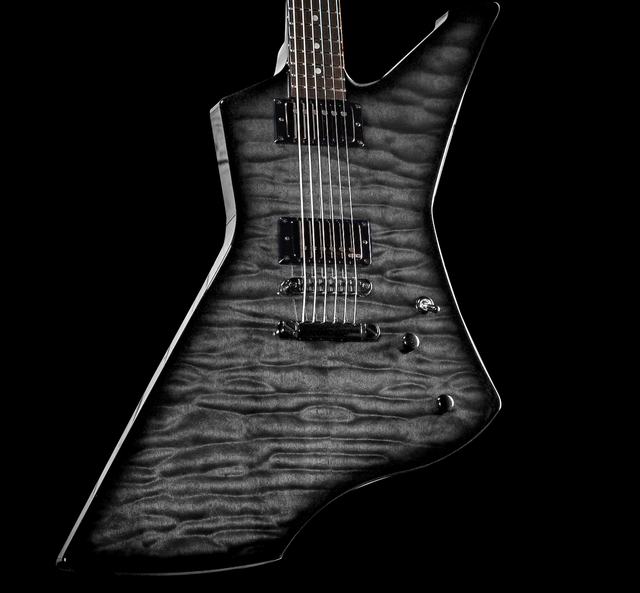 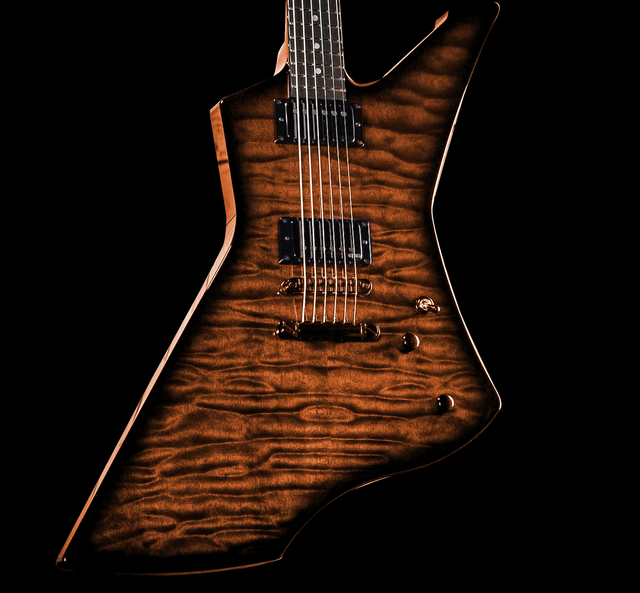 I love the first and last one. What an amazing look on these colors.

Thanks for sharing Larry!

Would you be so kind to present us the vulture in see thru red sunburst as the snakebite and a blue one?

I did a few additional options... 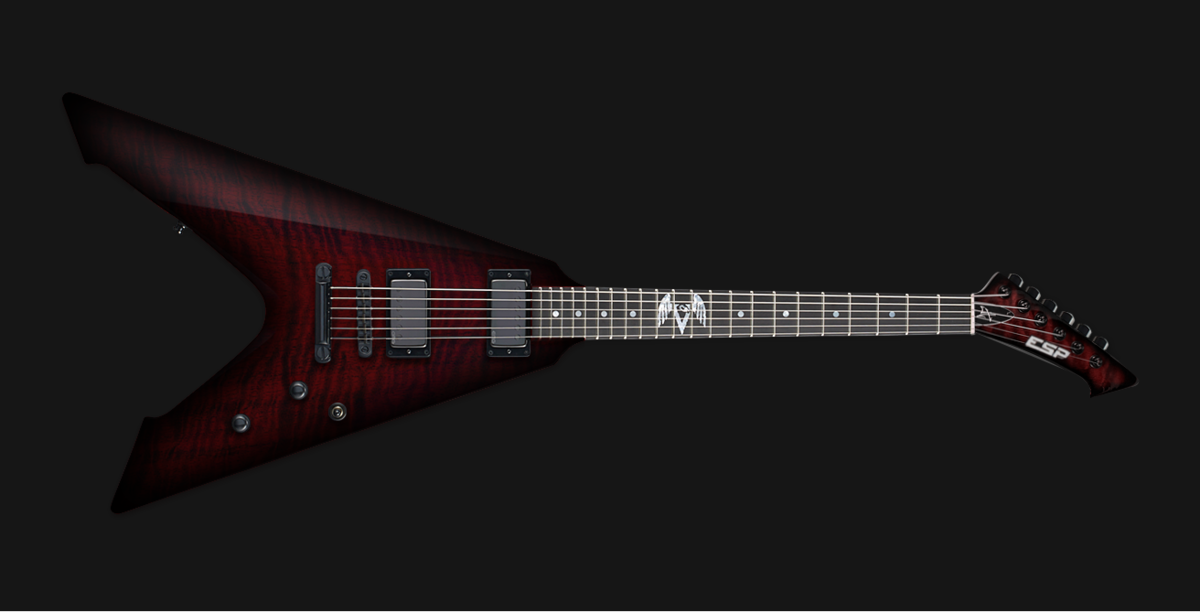 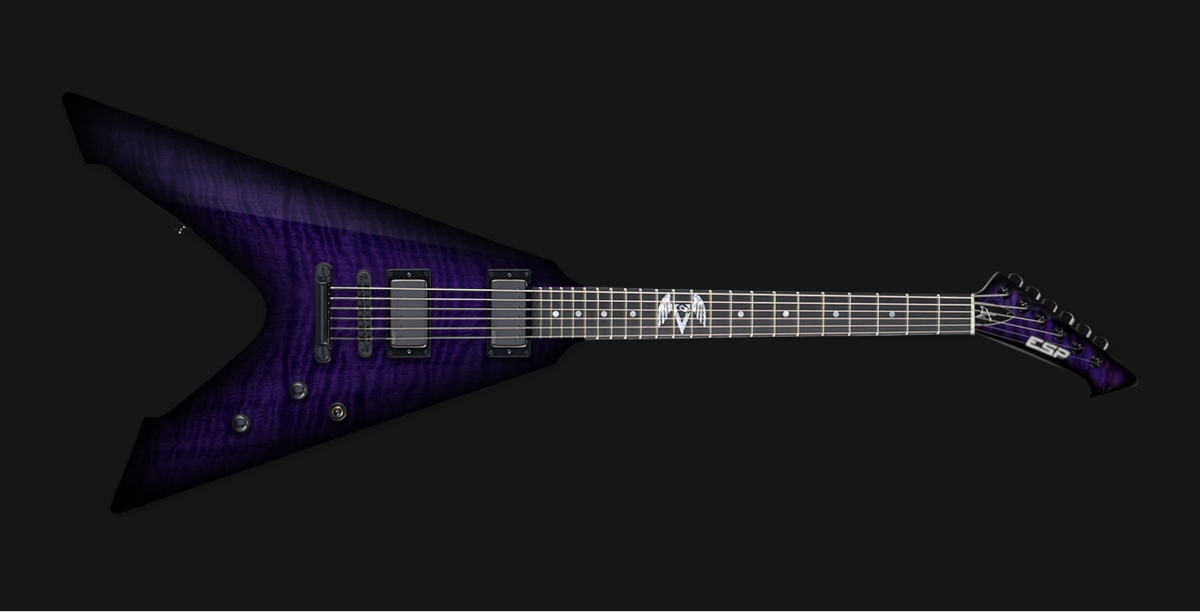 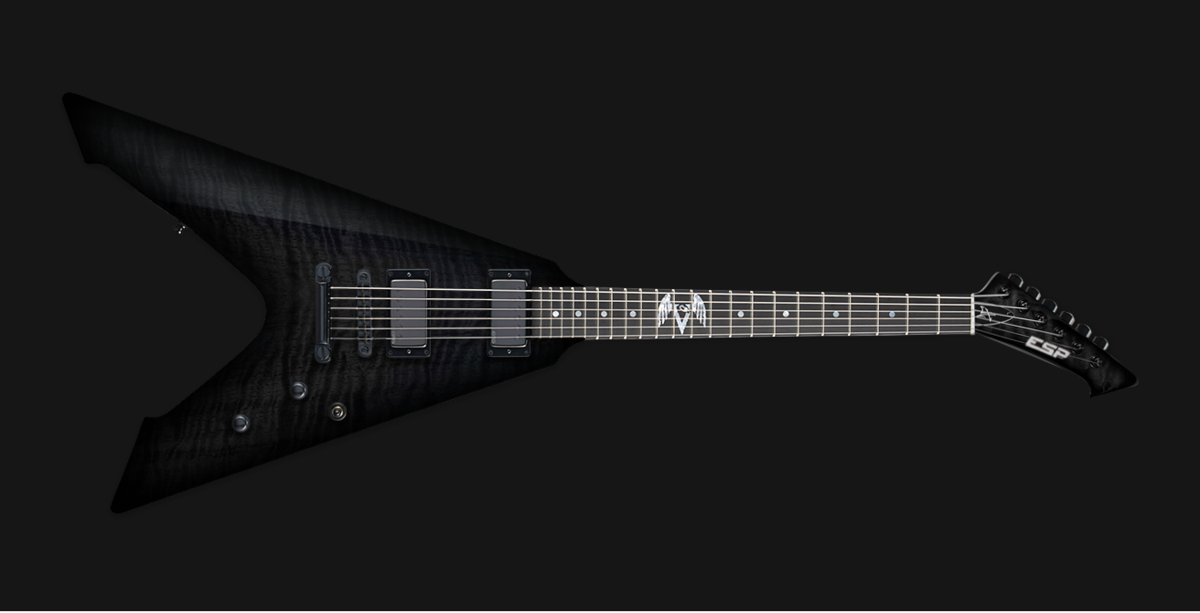 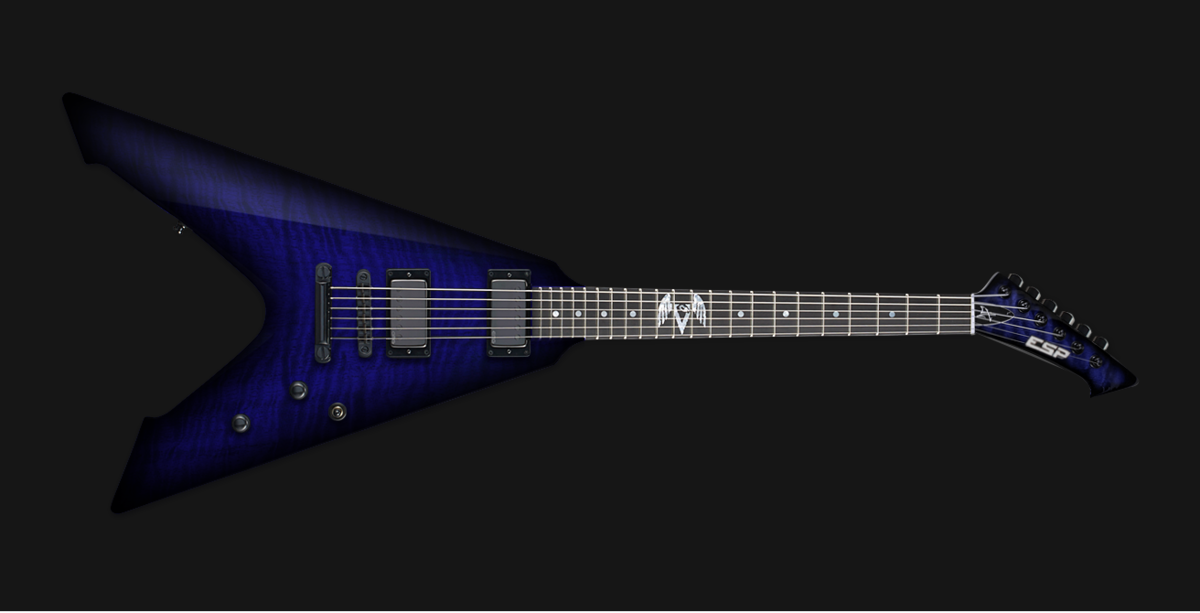 So I asked ESP if could get the normal non baritone Snakebyte with the purple baritone finish - no dice.

Yet you’ve prolly all seen the natural finish Snakebyte on Reverb.
https://reverb.com/item/21487080-2016-esp-snakebyte-ntls-james-hetfield-custom-shop?utm_source=ios-app&utm_medium=share

There’s also a hot pink KH I’ve seen in the custom gallery or DCGL I forget ..

Anyone have experience with what ESP will & won’t change on a sig ?

I did a few additional options...

My favorite one is the red snakebite that it is more bright than the black cherry.  For the vulture, I guess that snow white will be more suitable, since the body is too small for figure wood to shine.

I did a little more tinkering just for fun and clearly used some feedback on this thread as inspiration. dubster82 - the last two are for you.

Wow bro! They look CRAZY good! The Amber colour on the bottom is my favourite I think.

The quilt top Snakebyte always seemed weird to me though as a Hetfield Sig, he's just always had solid colours haha..

I think my next dream explorer would be a 5A quilt top. PRS does what they call a micro burst on private stock, would want that technique, and finish the top color like a '79 silverburst that's slightly greened but not fully... Perfect in between. Then grey doghaired striped mahogany back and neck. Ebony board. Matching headstock.

Gibson needs to lose some lawsuits to open up sales of the mx again!

I am eagerly waiting for the camo releases for the snakebyte and the vulture.

Larry L.The Vulture in that green burst would look awesome.

I am curious about the one he is using during some videos of the last album. It looks like a rusty Snakebyte. Could be nice if this would come available as an LTD version. Maybe now in combination with the reclamed rust 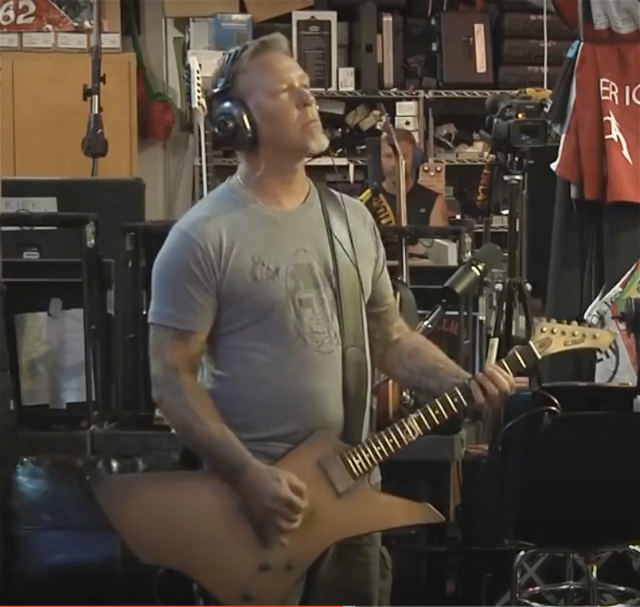 I've always wondered about that specific snakebyte myself as it shows up in a number of the "Making of Hardwired" videos and in the BG of HQ. I think it could be a Hutchinson Concept that is "finish only" - http://www.hutchinsonguitars.com/concepts/.

It was made by Bill Nash for him. And he wont give any details- I tried.

Indeed, same here. Could be, it is a similar concept indeed! Maybe a good idea fot the 40th anniversary of the band

to make such guitars available to the public

I couldn't agree more. I was, not-so-secretly, hoping that maybe we would see a snakeskin snakebyte for the Black Album 30th Anniversary next year.

That would be very nice as well!

I would really like the camo one to come out, though better it it doesn't or my checkbook will continue to hate me.